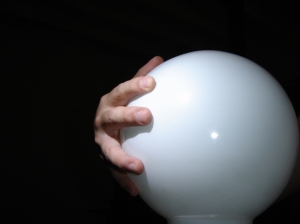 It’s Vegas baby! The season ending race is upon us and INDYCAR related events in sin city have been in full swing for a day or two. 34 drivers are primed to start, Dan Wheldon is going for the millions, rookie of the year honors will be given out, the Dallara IR03 will see its last lap turned in anger, and there is still a championship yet to be decided! There has not been this many significant story lines entering a race for quite some time. Vegas has a spotted history with championship racing; those events in the past could never stand the test of time and died as quickly as they were created. I very much hope that this event will turn into a race not to miss, and one that will be able to pull good numbers and continuously have good sponsorship and attendance. We need it, ovalistas need it, and the series needs it.

Heading into championship weekend, I have realized that… I have a lot to say about it. I have decided to break this week’s “Into The Crystal Ball…” into a two part epic-super-deluxe edition. Today will have three discussion points; with the final two coming tomorrow along with predictions and over/unders to ponder. It is Las Vegas after all. There are many things going on as we close the book on the IRL era of American open wheel racing.

Rookie of the Year – James Hinchcliffe has decided his turn to be the ROTY leader after the checkers fell in Kentucky. Hinchcliffe and JR Hildebrandt have swapped the lead in the standing after almost every race since the Mid-Ohio round. Only a mere six points separate them heading into the season finale where one will be crowned champion on Sunday afternoon. `Hildebrandt has shown speed on the 1.5 milers but doesn’t have the finishes to back it up; buoyed by his oval centric team Panther Racing. Panther is the team when I think of oval racing, but have had a painful fall from grace since their last championship year in 2002 with Sam Hornish Jr. The team has not won a race since 2005 when Tomas Scheckter took the win at Texas. Panther has the prowess to hang with the big boys, even at these engineering-exercises-also-called-1.5 mile-race-tracks.

Newman /Haas, a team soaking in open wheel history and glory, has had a tough time acclimating to the water of the IRL and now INDYCAR series. 2011 has been their first real shot into the series while standing on their own. Unlike Panther, NHR brings the knowledge of two drivers and having the veteran Oriol Servia in one seat undoubtedly help rookie James Hinchcliffe in his title quest. The team is contesting the season with machines that have never seen a wind tunnel or a shaker rig. Hinch will be facing tough competition from JR and Panther Racing, but may have the edge at the end of the day.

No matter how it turns out, this year has been a fantastic battle between the two young North Americans. I mean, this is great. Excluding the unification year of 2008, we have not had an honest to goodness rookie battle since 2004! And in 2008, the IRL guy, Hideki Mutoh took the honors in an oval heavy season.

Season Championship – Indycar has been fortunate enough to have had absolutely amazing championship battles in recent history. In no less than the last five years the championship will come down to the final race. This will be the 12th time in the 16 years previous that this feat has happened. Considering the perennial domination of one team or another, this is a very surprising statistic. Only four teams have won the championship in the last ten years and this season will be no different. The series, also, seems to always have seven or eight winners, with a first timer or two thrown in for good measure. It amazes me year in and out how much perceived parity there seems to be; yet only two teams ever realistically have a chance at the championship.

This year it all comes down to Will Power and Dario Franchitti… again. The power vacuum at the top is strong, and has been breached this year, but no one outside the two top teams of Penske and Ganassi could vie for the season ending hardware. We have had eight winners this year; Tony Kanaan and Helio Castroneves are winless.  Added to that, the only repeat winners through Baltimore were the two leaders, and you really start to understand that winning is everything in this series. You cannot points race and standing on the top step of the podium multiple times is a must if one is to win the title. I absolutely do not see Dario and Will points racing; both will be shooting for the win because they have to.

The 34 – The largest starting field outside of Indianapolis. I will venture a guess that this may be the largest starting field of the CART to present era outside of those two odd ball 35 car Indy 500 fields. We have exactly one less mile of real estate to work with as well. The field is relatively deep with talent so there should not be the lame rookie mistakes that we often see at the rear of the grid in Indianapolis. To help visualize the kind of traffic that drivers will have to deal with consider this. The classic car count limit at Indianapolis was due to the rules of AAA at the time. They said every car needed 400 feet of real estate for safety purposes, thus was born 33 cars to 2.5 miles of track. 400 feet between the cars spread equally across the track. With 34 cars on the 1.5 mile oval of Vegas;   drivers will have 233 feet. Almost half of the room compared to Indy. The quarters will be tight and traffic will be heavy. Drivers beware.

Pit lane is another area of concern. I am aware that 43 stock cars are able to navigate the pits without too much hubbub, but we could be in for a completely different kind of beast this weekend. 34 open wheeled, carbon fiber constructed race cars could potentially all be pitting together. If that is not a recipe for disaster, especially after the 29 car field at Kentucky has so many issues, I don’t know what is.  I pray that every pit crew member of every team attending the event this weekend will be able to walk back onto to the airplane and be able to fly back to family. It’s that out drivers are crazy and make poor decisions, because they are and do on a regular basis, but pit lane is a scary place to be no matter what the situation.

That could only possibly leave the five million dollar challenge. Yes, I have as much to say about that as I do these four things. I am very melancholy about this weekend. The excitement for 2012 is almost uncontainable and 2011 was supposed to be a quick and painless transition year without much hype or storyline. Just the opposite has happened, which is no surprise considering how emotionally attached  the fan base is to the sport. There is no way we could have set back and accepted a ho hum year. There were many things to get up in arms about this season, and rightfully so, but things have been relatively calm the past few weeks. We, as crazy and angry fans, should embrace this and just enjoy our finale weekend. It looks like it will be extremely fun and I cannot think of a better place to say goodbye to the current car and simultaneously hold the kind of season ending blow out that we are going to witness this weekend.

Make sure you check out part two on Friday morning.

This entry was posted in Into the crystal ball and tagged Indycar, Las Vegas, Las Vegas Motor Speedway. Bookmark the permalink.