On The Ground… IndyCar at Mid-Ohio

The Alarm was supposed to wake up at 5:45 race morning so I could get a good start on the nearly four hour drive out to the Mid-Ohio Sports Car Course for the Honda Indy 200. Instead, the most intense lightning and rain storm we have had for quite some time here in Indianapolis decided to rouse me from slumber sometime before 5:30. Not all bad, I thought, getting on the road a bit early could only bring benefits for the rest of the day. But once I actually got in the car and moving, by some impossible act of nature, it actually started to rain harder.

The speed was way too slow so a b-line to Wal-Mart for a legit rain coat would be my reprieve from the rain. Assuming I would be in this storm all day long, preparations had to be made. I stood inside of the store for about 30 minutes to let the heaviest part of the storm pass. 6:30 and I was finally on the road. For the next two hours, a light drizzle was accompanied by non-stop lightning to the north as I drove down I-70 into Ohio. This was shaping up to be a crazy day in the weather.

As I was driving through Lexington, Ohio, the town that calls Mid-Ohio its own, I spotted a few scalpers and decided to roll the dice and see what they had. I walked away 40 dollars lighter but had scored a Sunday general admission ticket and a paddock pass. This was incredible considering tickets at the gate were 50 bucks. After five more minutes of driving, I pulled into the facility and was directed by the knowledgeable staff to an outfield parking lot. The rain was all but finished so I grabbed my chair, backpack and map and headed out into the weird and wild world of indycar racing at Mid-Ohio.

Being absolutely ignorant to my location, I just headed towards the loud noises and found myself at the turn two hairpin. The campground was right there and being and avid camper I walked down the outside towards the kink to check the situation out. I will camp here eventually. The sites were shaded and no more than 100 feet from the track; A+ amenities for primitive camping. Unfortunately I was headed into a dead-end. My hope was to use the supposed pedestrian tunnel past the kink, but that idea was not to be and I’m not even sure that tunnel even exists. Off to the pits then.

Background music for my expedition was provided by the Pirelli World Challenge Championship. The ALMS equivalent to Grand-Am’s Continental Tire Sports Car Series was represented by four classes with 55 machines taking the green flag. The mix of roaring engine noise was incredible with huge displacement Cadillac CTS-V’s and the high-tech turbo Volvo’s, all sorts of tiny Touring Cars and everything inbetween. After seeing the CTSCS at The Speedway a week ago, the PWCC possesses the far superior car selection. I was quite impressed with it all, but departed the track’s edge to head into the garage area.

The haulers, hospitality, support series and indycar garages were all housed very tightly. Nothing was too far from the rear of the paddock with USF2000 teams working literally on the side of the road. It was a circus of racecars being wheeled and driven around, crew guys who were clearly on important missions and fans everywhere. It was a cool sight just being in the thick of things.

Fan access is at an all-time high at Mid-Ohio because the main garages have elevated cat-walks above each stall. That is the best view away from the track I have ever seen. The exhausts were pointed straight at the rail and that sweet ethanol smell was blasted in your face. Awesome. Nothing else can describe it. For this single reason, if the behind the scenes aspect intrigues you, Mid-Ohio is a must see. I ran into none other than freaking @stevewittich and we watched the USF2000 race from the elevated cat-walks on the backside of the garages. Again, awesome.

Steve has been in contact with the always elusive Meesh Beer (visit her blog) and we met up with her right outside of victory circle. She whisked me into the thick of the USF2000 podium celebration and just as quickly out to the grid for driver introductions. I’m almost sure that every paddock pass also grants you access to the grid; yet again Mid-Ohio, well done. I rubbed shoulders with the greats and drooled over the high-speed machines. I have never seen the cars in road course configuration up close; the two packages are very different. It’s a cool distinction.

As I was getting shooed away to the seating areas, I ran into Doug Patterson of Open Paddock fame and he ever so graciously invited me to his base of operation across from China Beach. Mike Whitesell, also from Open Paddock, was there to greet me with the sweetest canned IPA I have ever tasted. I watched the drivers take the green and about the first third of the race from this location. Watching those guys navigate this complex so cleanly was exhilarating. It was dirty, off camber and definitely not flat, so the skill was truly exemplified here. 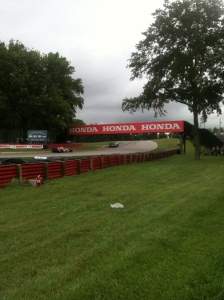 The rest of the afternoon consisted of a slow clockwise circumnavigation of the inside of the track. When we hear the drivers say Mid-Ohio is hilly and always moving, they are not kidding. That final hour was quite the workout as I trekked my way over hills, through the mud and into the prime viewing spots around the course. I sat at the entrance to turn 11 until nearly the end, because I saw something unexpected. Turn 11 is a banked, uphill turn and the speed the drivers could carry though here was heart stopping. I have seen Formula One at The Speedway so I knew what single seaters can do on a road course, but this was something I would never have expected from an indycar.

This entire time I could hear poor Ryan Hunter-Reay’s engine getting sicker and sicker throughout the afternoon. It was immediately noticeable the first lap he went by and almost surprising because of the bass sound rumbling from his exhaust pipes. TV does not do something like this justice. Racing is a visceral experience and needs to be seen live to fully appreciate everything it has to offer; this was a perfect example. The drivers were shifting, on and off the gas and the cars were light over the crests and heavy in the valleys. The sound of racing was totally different here than on an oval; I could hear the backfires and engines bouncing off the rev-limiter in Milwaukee, but you can feel it here. 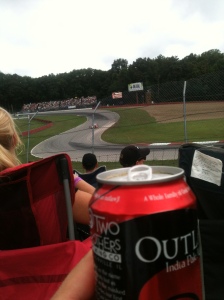 The checkers fell as I stood on a hill near the start of the main straight. The previous 90 minutes were some of the most frantic and fast paced laps I have ever seen turned in the flesh. You could see the drivers working in the cockpit and the gap compress and expand lap to lap. This was the first legit road race outside of The Speedway that I attended and it was a totally different experience. I was a dude wondering around in the woods with a scanner and a chair making friends along the way. I know there were grandstands, but I never even got close to them and it was a very “neighborly” feeling.

As expected at any race, the fans were there for all different reasons. I found many more people “into” indycar racing and there for mainly an afternoon of open wheeled insanity. Families were simply grilling and hanging out the entire length of thunder valley and to my surprise there weren’t that many wonderers in the interior just looking for a loud place to drink. Mid-Ohio is really loved by the locals and they seem to like their motorsports and have no problem taking in a mixed weekend of action. And I fell in love with the place during the few short hours I was on-site.

All in all, it was a very enjoyable afternoon. The racing may not be upper echelon, but the experience more than makes up for it in person. This doesn’t necessarily help the TV product and the new chassis has been making inroads to helping that issue. Anyone could come here and have a good time. As I made my way to the car, the crowd was buzzing from the events. Considering the caution free afternoon that is probably a good sign for the health of the event.

I’m hooked, and I will be back. More people will come with me and a great time will be had. From what I saw, it would be impossible not to have fun if you are into motorsports at all. On the fence about attending a live road course event? Do it, you will understand what the buzz is all about. The action does not stop all afternoon, and you get to be close enough to the drivers to actually see them earn their money.

This entry was posted in On The Ground and tagged Honda Indy 200, Indycar, Mid-Ohio Sports Car Course, on the ground. Bookmark the permalink.

2 Responses to On The Ground… IndyCar at Mid-Ohio