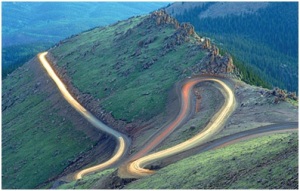 The American open wheel championship has played host to a multitude of different types of racing facilities throughout its 100 plus year history. From the bricks of Indianapolis, to the open streets of Santa Monica; on the high banks of the Tacoma board oval and on the flat dirt at Springfield. No other series in the world can boast the scheduling diversity that the many incarnations of our national championship can claim.

This very schedule has also seen an interesting assortment of one off races as well as the most unusual outlier to be found anywhere in the motorsports world: the Pikes Peak Hill Climb. Hill climbs are certainly not rare, but their inclusion in a multi-discipline championship is very unique. Not only is it a hill climb, but it is also a point-to-point, single car run time attack at its core. And not only did USAC pay points off and on for the event from the 1940’s through the 1960’s, but it also drew the brightest stars in American open wheel racing at the time.

The event has not been part of the national championship trail as a points paying event since 1969; making its final appearance in 1970 at a non-championship event. But considering we are in a painful three week break and the 2012 edition of the hill climb concluded last weekend, now seems like a perfect time to take a walk back in history.

Pike Peak has held the imaginations of Americans since its discovery 1806. Initially deemed to be unconquerable by man, the peak was taken in 1920 by Edwin James. Many summits by horse, mule and foot followed, and the mountain became a centerpiece in the 1859 Colorado gold rush after a vein was found the prior year. The peak is so ingrained in American lore that in 1893, Katharine Lee Bates penned America the Beautiful while recalling her time on the summit. 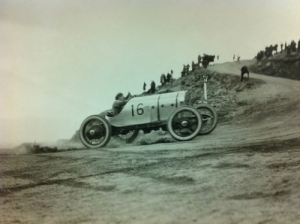 1901 saw the first vestiges of the Pikes Peak Highway created with the completion of a small road to the top, and later that year an automobile was seen at the peak for the first time in history; the journey took a quick and concise nine hours in a Locomobile Steamer. In 1915, the dusty trail was converted to what is now known as the Pikes Peak Highway and the Hill Climb was inaugurated in 1916 as a tourist draw. Rea Lentz won the 1916 edition with a time of 20:66.6; much improved over the initial nine hour grind to the top only 15 years prior.

96 years later the route still follows the same 12.42 miles of twisting mountain road through 156 different turns, and all while gaining 4,720 feet of altitude in the process. As of the 2012 event, the entire highway has been paved due to environmental concerns; there was over 50 feet of gravel flung from race tires accumulating in mountain side creeks. It is the second oldest motorsport event in America; only eight years younger than the Indianapolis Motor Speedway, but no less important during the development of the American automotive industry.

As with many automobiling events of the early era, the classes were very open. Through the years as automotive and motorcycling needs have changed, many classes have been added and even more dropped. However, todays open wheel class can trace it’s history through Indianapolis, across the championship and back to the inaugural race in 1916; open wheel has been the defining class of the competition since its inception.

When America was bouncing back post WWII, AAA decided to include the hill climb on the national championship trail as a non-points event. There was just not enough champ car (races over 100 miles in length) events to make an entire season. Along with the hill climb, 71 sprint races were included to bring the yearlong total to a ridiculous 77 races plus two non-championship events (the nuances of the 1946 season is a subject for another day). 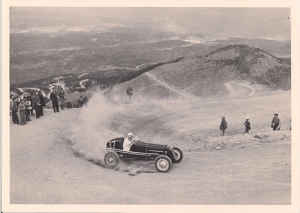 Modified championship cars were the weapons of choice, and in 1947 the hill climb was granted full championship status as a points paying round. Louis Unser won the first points paying race held on the mountain road; it was his eight of nine wins at the hill climb. Unser, uncle to Jerry, Bobby and Big Al, clinched his first victory in 1934 and made his final appearance on the top step in 1953 for an incredible 19 years and a world war separating the two.

The AAA national championship included the race to the clouds for nine years until 1956 when USAC took over sanctioning duties of the championship. The event was held as a non-points race for nine more years; Bobby Unser dominated this era with a total of seven non-championship wins before handing the top step to his brother Al in 1964.

USAC once again granted points to the event in 1965 and Big Al took his second win at the event; this time for points. Bobby won two more times before Mario Andretti claimed the final points paying win in 1969. 1970 marked the final time the hill climb would appear on the national championship trail, albeit as a non-points paying race.

1970 was a turning point in championship racing and by 1971 it would never be the same. The final year for the hill climb would also be the final time a dirt oval would play host to a competent national championship points paying race. Speed, cost and safety all had a hand in striking the hill climb from the annals of American open wheel racing. The event lost no steam and has continued uninterrupted and stronger than ever into the modern era.

Although we will never see another event like this in the championship, it is a very interesting sidebar in the history of our sport. With the course fully paved for the 2012 and beyond season and once the new indycar equipment has its bugs worked out, wouldn’t it be cool to see the undisputed king of pavement Will Power make an exhibition run up the hill just for old time’s sake?

(Note: Some will point to the Cactus Derby as the first point to point championship event. This is incorrect, the Cactus Cup was contested in 1909 or seven years before the second official championship season in 1916 with the first in 1905. Any “championships” from pre 1916 excluding 1905 should be considered unofficial and not part of the historical record of American open wheel racing.)